In this piece I will show you how Apple forces you (using UX dark patterns) to update the OS on the your devices (e.g. you need a new phone to run the latest iPhone und Watch OS versions) so that you buy new hardware (Apple’s main business model for the time being; although that may be changing as we speak).

I would not necessarily call me an Apple fanboy although I have a lot of Apple devices. I started using them in the early 90ies. My father had a printing company and did Desktop Publishing with e.g. QuarkXPress (as it was called way back then; the Photoshop 1.0-days). As these programs only ran on Apple’s hardware, I was naturally exposed to the Apple ecosystem.

Keeping the iPhone fast and tidy

I have an iPhone 7 that still runs very smoothly. I don’t store much data on the phone. In fact, I still have about 80% of 128 GB storage available (as I don’t store photos in the cloud but move them 1x/year off the phone onto an external drive and then run frequent backups).

Furthermore, I don’t actually store any other data on the phone that that is local to that device. Contacts, Files, some Photos are all synced up. All 3rd party app data lives in the cloud anyway. The beauty of this approach is that, if you lose the phone or if someone does that for you, you buy a new phone, either restore from from backup or, my favourite, set it up as a new phone. This approach guarantees fresh and smoothly running devices at all times. 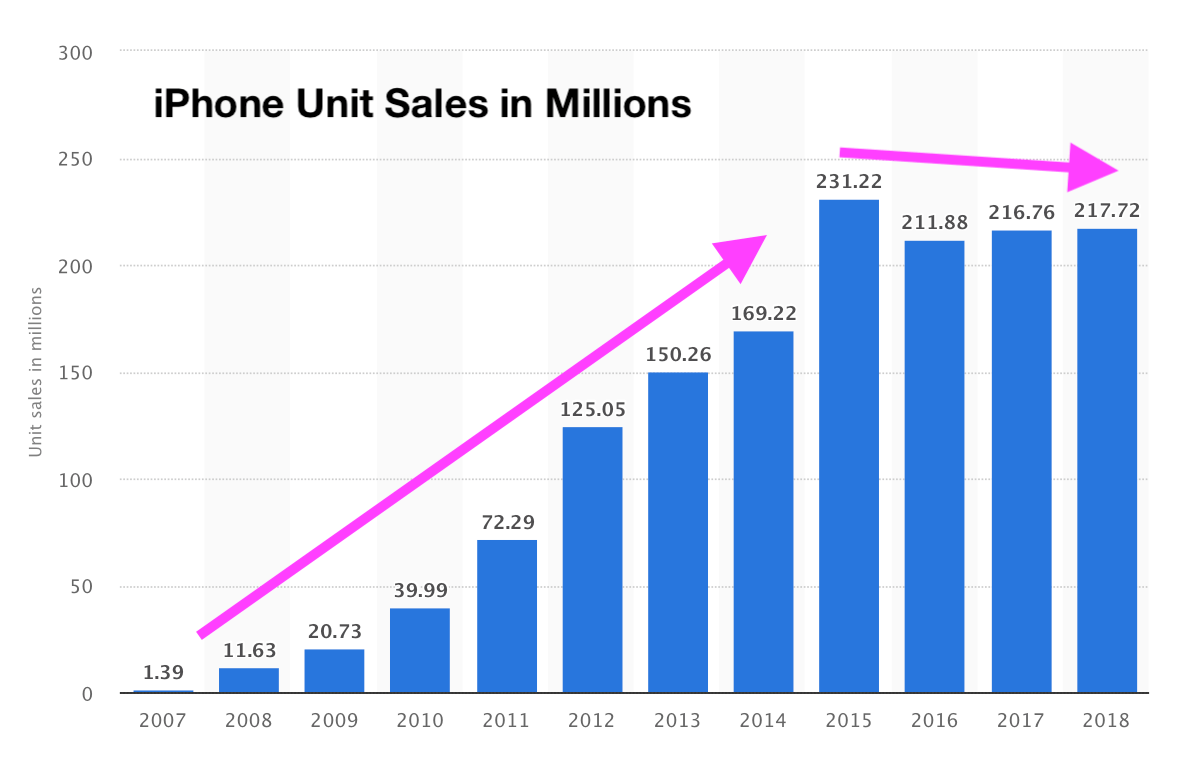 Alas, and this point is important: I am not forced to update to a new phone due to storage or speed issues (running each and every OS update or restoring from backups makes the device slower and slower on each turn).

This next point may come as a surprise as we are talking about Apple’s hardware and ecosystem. I started seriously educating myself about investing a few years ago. This education, of course, gave me much deeper insights in terms of what your money can do for you, if you don’t spend it. So, when the X came out, I was literally thinking: If I do a good job of picking good companies, I could turn 1000 EUR (which I may spend for a new phone) into ~5000 EUR in 10 years.

I would not and did not, eventually.

I went with the latter option, though, it’s only a possibility and not a guarantee. On the flip side, the bigger display surely is guaranteed but paying 1,000 EUR for the phone now would certainly not allow for the possibility of getting 5,000 EUR in a few years. For the more investing-inclined reader, making 5,000 EUR out of 1,000 EUR in 10 years would be CAGR (compound annual growth rate) of 17.46% (certainly not an easy feat).

But back to Apple.

A premium price for less than a premium experience?

My iPhone 7 still runs very smoothly but I started looking at getting a new one recently due to the fact that the market now offers high-quality smartphones that cost a fraction of what Apple is commanding for their flagship product. I typically consult my brothers first as one of them is on iOS and the other on Android (and both have changed phones more frequently in the past few years).

Unsurprisingly, I am not the only one who noticed!

In the past, I happily paid a premium for Apple’s hardware due to the hardware’s top-notch design quality, OS and ecosystem. This willingness has changed dramatically over the last couple of years. I was looking into, e.g. the Huawei’s P30 or Nokia’s 7(.1). The latter comes with the benefit of running a baseline version of Android without another (UI) layer on top. Tom’s Guide voted the camera of the P30 Pro to be better than the one of the iPhone XS Max.

Apple was never about the best hardware!

Next to the iPhone, I have an Apple Watch 2 as well. And this is where the dark pattern comes into play.

But first up, some background. If you are an Android user, you may not know that Apple’s watch is tightly coupled with the iPhone. In order to set up the watch, you need an iPhone (at least up until now, it may change down the road).

On a yearly cadence, you may install an update of Apple’s iOS or watchOS. Apart from a fancier, newer OS, these updates have one major side-effect: it makes the phone or watch slower! I cannot prove it with data, but I have yet to meet a person who says that running update after update makes a device faster. Quite the contrary, especially in Apple’s case as hardware is their business model.

But don’t take my word for it: Updating the OS continuously makes a device a lot slower. Have a look at these videos on Youtube if you are not convinced. In all fairness though, Apple did a good job with iOS 12 as it did make the OS run faster, even on older devices (like my iPad mini). 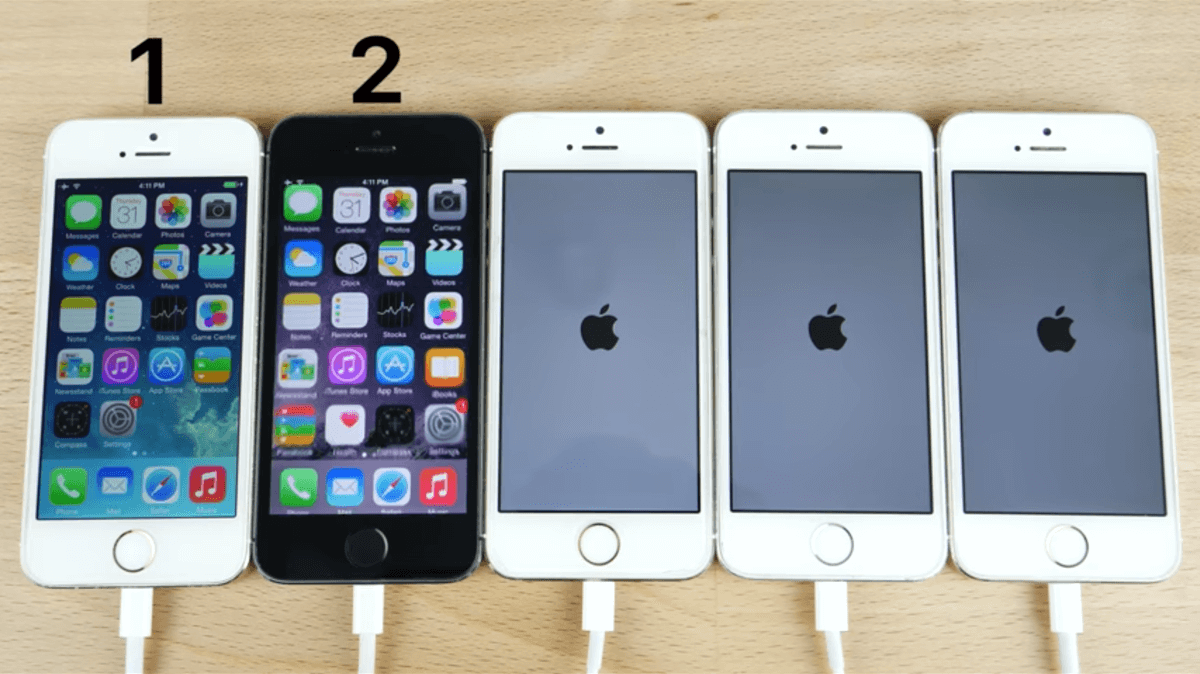 Now, since the watch needs an iPhone, guess what happens when you buy a new iPhone? Yes, indeed, you have to update the watch’s OS as well. Let’s review that happened to my wife when she bought a new iPhone late last year.

The new iPhone required her to update watchOS, from v4 to v5.

Remember that device become slower with each update. Well, you may argue that a few milliseconds here and there don’t matter. Well, speed and fluidity of the UI on your watch do matter a lot. Why? A typical interaction with your Apple Watch lasts seconds, not minutes as on your phone. Unfortunately though, I wasn’t able to find a good study. I can only tell from my wife’s experience and my own personal point of view.

Alas, milliseconds do matter, a lot! See this video:

As I saw what happened to the speed of my wife’s watch, I purposely did hold off updating to v5. I was happy with how my watch’s features of watchOS 4.

Then the other day, about mid-July 2019, I was teased by through a dialog to update my iPhone from version 12.3 to 12.3.1. In order to understand the full depth of this deceptive dark pattern, please follow along for 20s. Now, software versioning very often follows semantic versioning specifications. Hence, each number in a version sequence like 12.3.1, as per SemVer, stands for:

Alas, my thinking was that this small update will surely fix some security vulnerabilities. Apple published this about the 12.3.1 update:

“iOS 12.3.1 includes bug fixes for your iPhone and iPad. This update:

Well, far from it. And this where I got real’ angry. Here’s what’s happened:

The days after I installed the update on the iPhone, I started to notice a sync failure in 2 apps on my watch. One of those apps is an app called Intervals which I heavily use for workouts. In that instance, I wasn’t able to get the watch app to update changes I made in the iPhone app. The most obvious thought was that this sync issue is due to the app itself (I had installed a small app update a few days prior).

I was about to email the app developer when “light struck me”: It wasn’t the app update, of course, but the iPhone OS update that caused the synchronisation to stop between watch and phone.

What did I have to do? Disgruntled that I would have to live with a slower watch OS, I updated watchOS. And indeed, watchOS now runs visibly slower than it did before the upgrade.

I made a video showing the change in speed with watch OS 5. These UI lags never occurred on Watch OS 4: See for yourself.

Now, that I have had a few weeks with Watch OS 5, here’s what like about it:

THAT’S IT! Nothing else on Watch OS 5 seems to be worth the update. The only worthwhile feature isn’t even something you actively use! See why I feel so disgruntled about this intensive deceptive dark pattern? 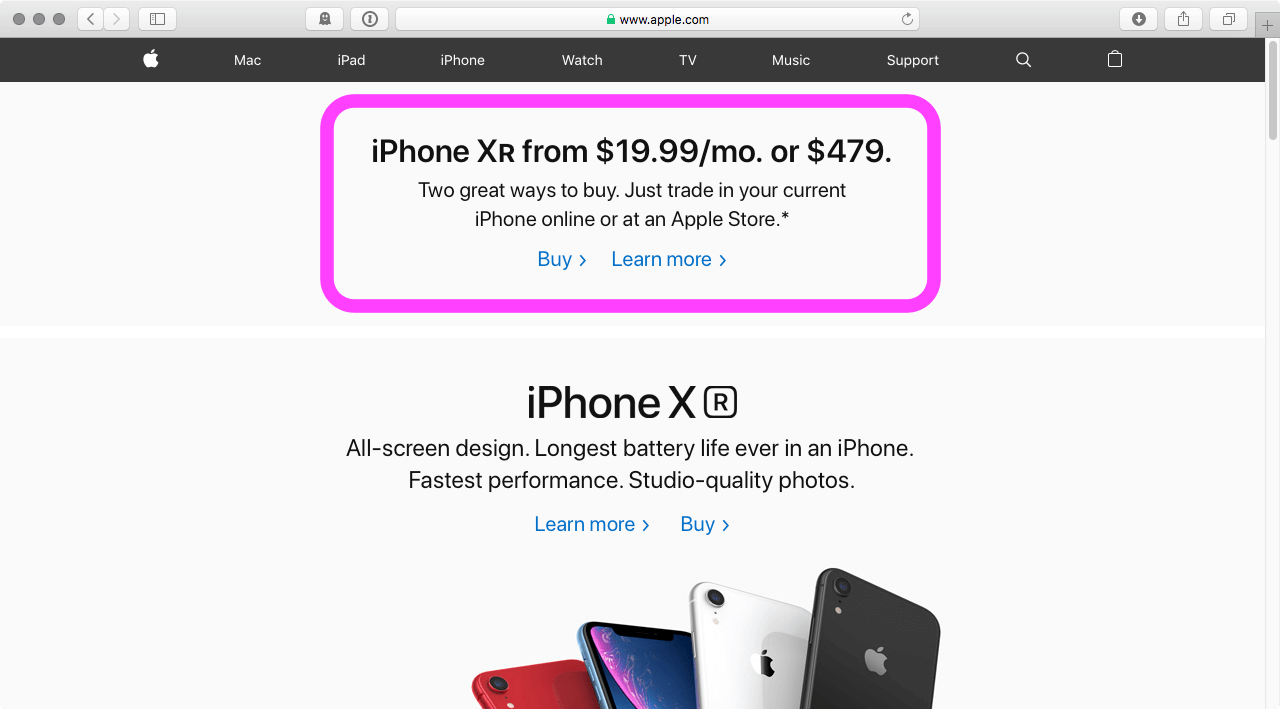 Why would Apple do such things? To make you buy new hardware, of course!

Have you noticed that Apple pushes people to trade in their old iPhones? Why would Apple offer this?

The reasons is, of course, simple. Much fewer people buy new iPhones. Why? My gut feel (confirmed to some extend by friends) is such that the market, e.g. Huawei, Nokia, offer similar-quality phones for 50% less. 50%! 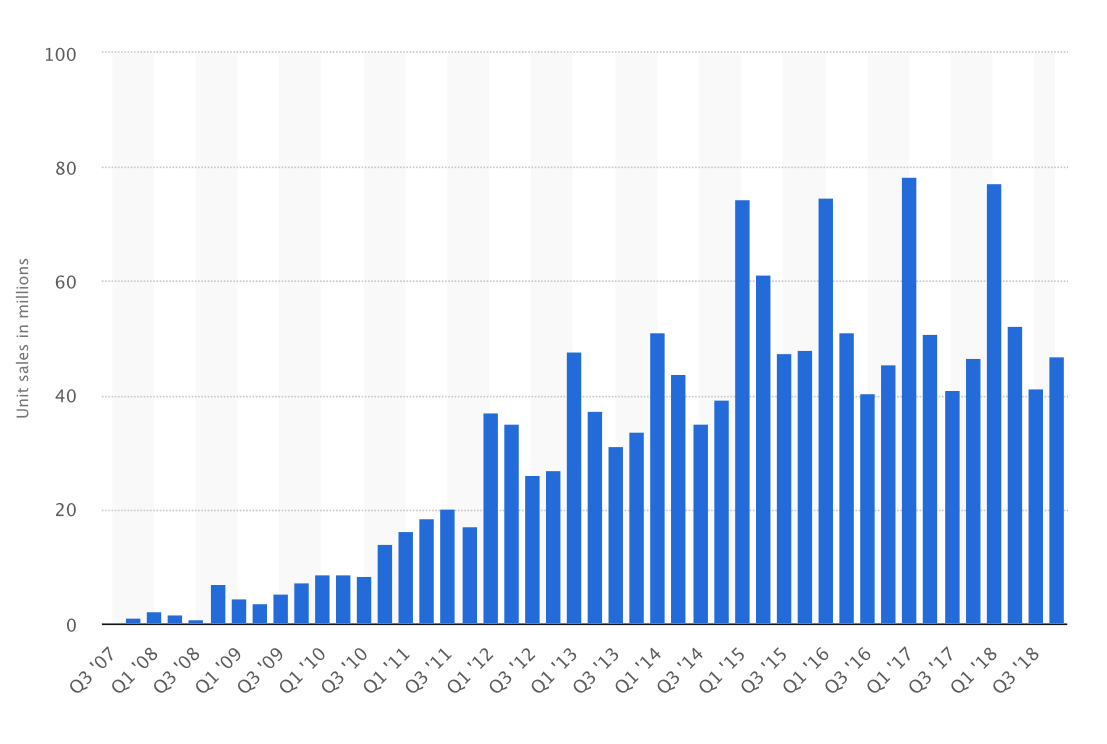 By offering a trade-in discount, Apple’s tries to keep you on their platform. Look at the charts. Imagine you would either keep your current phone longer or would chose to go for Android. Apple’s iPhone and Watch sales would fall sharply.

My personal takeaway from this experience is this: Apple uses every trick they can find to get people to upgrade their devices as their flagship product isn’t bringing in revenue growth and Apple itself does not have a replacement.

What out for more dark patterns!

What thoughts do you have? Get in touch.